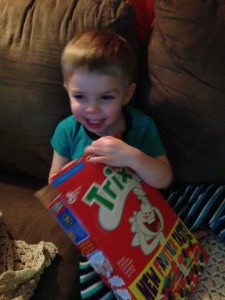 Rehearsal is common in the McVicar household! I tend to revamp and rehearse my college, corporate, hypnosis, and kid magic shows during the summer. Summers in St. Louis, MO are super hot with terrible humidity so it’s the perfect time to lock myself into my studio and take out material that is no longer working and add any new jokes and amazing magic tricks I have been wanting to try out.

Sometimes rehearsing in our house can be difficult as we have two young children who find my props fascinating. So this year when I was working on some new material for my kid magic show I decided to see if my 2.5 year old son could help and he became my rehearsing buddy. He recently started showing an interest in what I was working on and would even sit through a short routine or two. This is great when I need genuine kid feedback for a new magic trick. I was excited to perform it for him for the very first time. So I performed my new magic trick which required his participation and he did great! He laughed, participated when needed and most important for a kid magic trick was that I was able to hold his attention for the entire trick!!

It was so much fun to perform for him and know that this new kid magic show trick was definitely a great new addition to my show. The only problem and possibly a lesson for me is that when performing a magic trick for my kid, trying to avoid performing magic tricks for him that involve food. Especially kid food in bright kid colored packaging. You see the new kid magic trick I added to my kid magic show involves the use of the Trix cereal box. Even though my son has never had any Trix he somehow knew it was something deliciously sugary. After I was done performing the magic trick he asked to eat some because it was “yummy.” After explaining that it was only for the magic show and not to eat he broke out in hysterics. Lesson learned. (On a side note, my wife feeling bad for him, let him try some and it confirmed what he expected…that cereal was very “yummy”.)