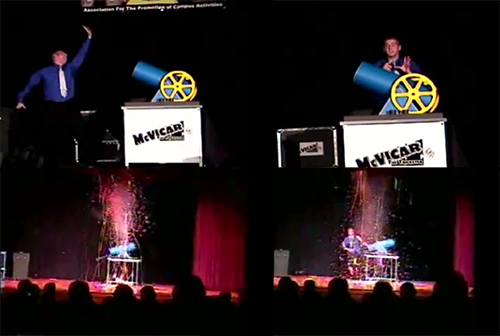 I’m always trying to add new material to my show. As a good magician I’m always creating. I had been wracking my brain for a big wild closer for my comedy magic show that would work in both corporate and college magic. The idea finally came to me as I was checking out a magic antique dealer’s collection when I discovered a notebook of a comedian magician that was over a hundred years old. In the notebook I discovered many interesting and funny ideas but they were unfortunately very dated and many of the ideas involved items that are even in use today.

I did find an idea though for an explosion gone wrong and I took this idea and developed my own based on it. It involved a cannon that shot cards into the air where I would be able to pluck the chosen card out of the sky by sheer luck or magic. Unfortunately the cannon backfires blowing me up and shredding my clothes only to have the selected card protruding to my forehead as if it were impaled in my skull.

It took me nearly a year to create everything involved in the routine from designing the cannon, hiring a magic builder to create the final product, and hiring a seamstress to create the outfit that I would be wearing when I blew up. Next came the hard part with scripting, joke writing, and blocking the routine until I created something I was so proud of that I finally got my chance to perform it live in St. Louis’s Magic on parade in 2006. I was so excited to see my magic creation on stage, yet I was still young and naïve.

The trick and the performance went over great but I underestimated certain factors in my excitement. There was such a mess that creating an explosion on stage can make, even though I was using air cannons and flash pots, the theater was cleaning streamers and confetti out of their rafters for the next year.  The next problem I had was that the weight of the magic trick was almost two hundred pounds which meant there would be no way to fly with it affordably. And lastly I didn’t take into account the sheer size of the magic trick and the 2 hour set up time and additional 1 hour to take it down after the show. Even though it was a great magic trick and I do still perform it for my local corporate magic and college magic shows, it ended up being taking out of my act the following year.

I have since learned to be a little pickier in creating and adding new magic to all of my comedy shows!