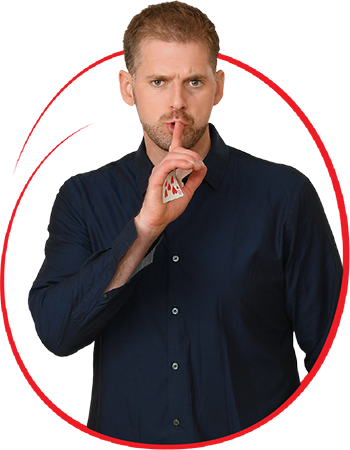 Josh McVicar is a master hypnotist, and both an up-close and stage magician. Don’t expect a tired, old folk’s variety show though… McVicar is a comedy showman with contemporary magic skills and fresh hypnosis skits. Few entertainers in the “comedy” genre offer a show that’s fun and hilarious, yet non-offensive and respectful, but Josh can. He encourages audience participation and interaction in all of his shows, and years of experience with all types of audiences has prepared him for just about anything.

Ever been to a show that bombed because the material was too cheesy or inappropriate for the audience? Josh McVicar is skilled in accommodation, with unique shows designed specifically for your market. He’s worked with hundreds of corporate event planners, student activity coordinators, and other organizers to deliver an audience-pleasing show.  These institutions tend to book Josh year after year because the viewers can’t wait to see him again. And not to worry – the show’s constantly evolving with new material all the time.

Josh began performing locally in the St. Louis area before honing his skills as a stage performer. He worked his way throughout the Midwest at locations such as Red Robin, Six Flags Mid America, St. Louis College of Pharmacy, Diamond Pet Foods, and Lake Forest University. He soon gained National prominence having performed in nearly all of the 50 states, in universities from coast to coast, and businesses throughout the region. But let’s not dwell on size (“that’s what he said”) – Josh does class reunions, birthday parties, and camps. Some of these smaller venues bring him back from the touring circuit to spend time with his lovely wife, two kids, and a little beagle named Belle.