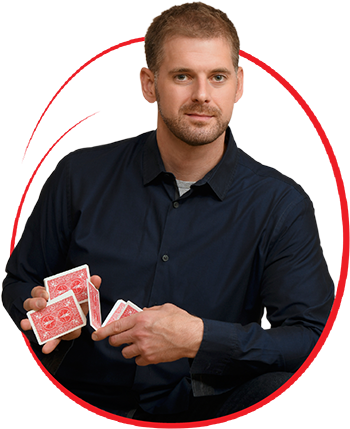 DON’T JUST TAKE MY WORD FOR IT…

“His hypnosis show was amazing! Lots of laughs had by all. Students loved his hypnosis performance and his 2-hour roving magic teaser earlier in the day. Great to work with, professional, and super flexible. Would highly recommend for any campus event.”
Elizabeth C. – Notre Dame College

“It’s hard to pull a fast one with the students at Missouri S&T but you’ve consistently done a wonderful job blowing minds and putting on a fantastic show that keeps people engaged. Thank you for working with us and being so willing to try new avenues of performing.”
Rebecka C – Missouri University of S & T

“Your tricks are truly mind-boggling and everyone of all ages enjoys them.”
Scott & Christine Weaver – Weaver Commercial & Home Improvements

“I’ve had several team members message me how much they enjoyed it. It was engaging and I like how you picked different people on our team and got them to participate.”
Jennifer F – Capacity

“Josh did an amazing job going with the flow with our group of about 250 guests. From us reducing his allotted show time, to the sound provided to him not being great, to having us change our show request at the last minute – he just rolled with it. I had an absolute blast. Thanks, Josh!!!”
Kristen B – Coca-Cola

“Josh was amazing and a delight to have! The students loved his energy and stage presence! We will surely book Josh again in the future!”
Ashton – Florida Gulf Coast University

“We had Josh come to our corporate Holiday Party and he blew everyone away! Everyone including the owner was very impressed and left wondering how he did it. Josh made our Holiday Party a success and very much kept everyone entertained. We will be seeing him again in the future. Thank you, Josh!”
Jessica N – Clearant

“What an unbelievable show! The ‘oohs’, ‘aahs’, and ‘what?!’s from the crowd were a great testament to the skill and entertainment Josh brought to the stage. Everyone was talking the week afterward and they are all in agreement… bring him back soon!”
Rocky Mountain College

“Wow what a night. Everyone in attendance has talked about Josh for 3 days now. I want to thank you for making our company Christmas party something for the ages. Best entertainer we have ever had for an event.”
Joey P. – Joe’s Pizza and Pasta

“The kids at camp absolutely adored you. So much, that I had a parent ask me for your contact information for an event they are hosting later this year. It was impressive how you were able to captivate a group of 25 campers, ages 4 to 8 years. That is a tough task! You performed tricks that neither the counselors or the kids had seen before and gave the kids a lot of chances to interact. Keep up the great work!”
Annie  – Bellerive Country Club Summer Camp

“Josh gave a great performance for our one of our Back to School events. He engaged with the students throughout the entire performance and his teaser beforehand went over well with our students.”
Alexa B – Southern Illinois University Edwardsville

“Josh has done our children’s parties and my wife’s 30th surprise party. The absolute best show I’ve been to or been part of on both occasions. He is so much fun and we would highly recommend him for anything you do. Even for your business or a family fun show. My only regret is not being able to give him 10 stars.”
Steve K

“We were extremely impressed with the roving magic of McVicar The Trickster. People would stop in their tracks to watch his tricks and he always wow’d the audience. I’ve never seen a more engaging and exciting magician in my four years on Programming Board. Josh rocks!”
Lucas S – Wake Forest University

“Crowd pleaser! From the beginning to the end complete entertainment. Would love to see him preform again!”
BRG Apartments

“Josh’s performance was awesome! Not only that but Josh himself was very fun to work with. His pre-show roaming magic was hilarious and mind blowing. He’s a great book for any kid of gig!”
Matt B – University of Pittsburgh at Greensburg

“Our campus loved Josh McVicar. We had one of our largest turn outs for this event. He was hilarious and very talented. Our students are still talking about his hypnotism! We will definitely have him back!”
Mary S – Muskingum University

“Josh McVicar is a must see! His ability to entertain a wide range of audience is impressive! We had him at our youth convention that hosts 400 students and he killed it! He did an absolute fantastic job and his material had the whole crowd amazed. Don’t miss an opportunity to book Josh McVicar!”
New Hope Church of God

“Students really liked the show, it was a high energy show filled with laughs, and audience involvement. You know its always going to be great when you get to see your friends embarrass themselves in front of the student body. Josh McVicar not only wowed the audience during his hypnotist show, but also with his close-up magic tricks. It was a great show which students really enjoyed.”
Haley M – Lyndon State College

“Josh was SUCH a hit at our pre-finals event at Central College. His student audience was engaged, at times confused, and highly entertained throughout the entire event. Personally, he was the best magician I have ever seen, and the tricks I saw him perform were SPOT ON! Thanks, Josh!”
Jeremy – Central College

“Josh traveled miles in a snow storm to get to our event! His tricks are still stumping us!”
Pries Enterprises

“Josh is a phenomenal magician and his hypnosis show is literally captivating! can’t wait to have him back on our campus in the future.”
California State University San Marcos

“Hilarious! Thought it was going to just be a thing to entertain kids but I genuinely was amazed and laughed a lot!”
Kayla D – Birthday Party